Getting married is awesome, but what’s even more awesome are wedding registries. Registries are like 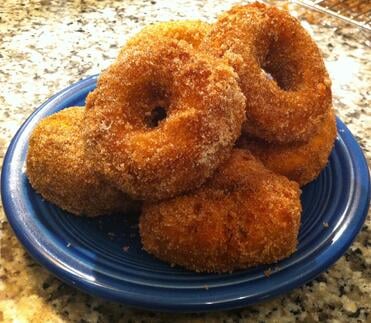 wish lists for all the fantastic, sometimes outlandish, but generally useful housewares it would otherwise probably take a lifetime to amass. For example: a clothes steamer? Great! Crab crackers? How else would one crack their crustaceans?! A doughnut cookie cutter? Clearly a modern home necessity.

Ok, so maybe that last one (or three) is just a tiny bit over-the-top, but I now just so happen to find myself the proud owner of a new steamer, set of crab crackers, and a mini doughnut cookie cutter.... which brings us to today’s post: homemade baked donuts. A while back I'd come across a delicious-looking recipe for mini pumpkin spice donuts; now seemed like the perfect time to put it into action! Unfortunately, and much to my chagrin, that recipe uses a donut pan instead of a donut cutter. Since I didn’t have a cute little cake pan to bake my donuts into donut shape, I needed something that would hold its form all on its lonesome: I needed a yeasted donut recipe. After a little hunting, I was able to find a good, yeasted, baked donut recipe from one of my favorite blogs, 101 Cookbooks. The yeasted recipe was for plain donuts, so I set out to see if I could pumpkin spice-ify the recipe.

The problem with pumpkin spice yeasted donuts is that pumpkin is heavy: adding it in any sizeable amount to the dough could prevent it from rising. Since I couldn't just replace all the  original yeasted recupe's liquid with pumpkin without negatively impacting the donuts' texture and ability to rise, that left three options: replace some of the recipe’s existing liquid with pumpkin puree, add additional yeast, or do both simultaneously. I opted for option three, replacing some of the recipe’s milk with pumpkin puree and adding in an extra ½ teaspoon of yeast. Since baked pumpkin spice donuts can’t exist without the spice, I also added a mixture of fall-friendly spices to the dough.

So how did these yeasted, baked pumpkin spice donuts turn out? See for yourself:

And now, for the recipe!

4 tablespoons cinnamon (more if you're a cinnamon lover)

Place 1/3 cup of the warm milk in the bowl of an electric mixer. Stir in the yeast and set aside for five minutes or so. Be sure your milk isn't too hot or it will kill the yeast. In the meantime, mix together the flour, salt, and spices and set aside in a small bowl.

Next, add the pumpkin, butter and sugar into the remaining 1/2 cup of milk and add it to the warm yeast mixture. With the mixer on low, stir in the eggs.

Add the flour, spice, and salt mixture to the wet ingredients, mixing until the flour is just blended in. With the dough hook attachment of your mixer (or using your hands to knead), work the dough for a few minutes at medium speed, until it forms into a ball and doesn;t stick to the side of the bowl.

The end goal is to wind up with a dough ball that is smooth and supple—your dough should look and feel a bit like a soft stress relief ball. If your dough is too sticky, add more flour. If it’s too stiff, add more milk a bit at a time. Once your dough is good to go, turn it out onto a floured counter-top, knead a few times (the dough should be barely sticky), and shape into a ball.

Transfer the dough to a buttered (or oiled) bowl, cover, put in a warm place. I like to turn the oven on as low as it goes (for me, that’s around 200 degrees F) and place the dough bow on the top shelf. Let the dough rise for an hour or until it has roughly doubled in size.

Once your dough has risen, gently punch it down (sorry, dough) and roll it out 1/2-inch thick on your floured countertop. Use your donut cutter (or two round cookie cutters of different sizes) to cut your donuts, then transfer them to parchment-lined baking sheets. Cover with a clean cloth and let rise for another 45 minutes.

Bake in a 375 degree oven until the bottoms are just golden, or 6 to 8 minutes. It is HIGHLY RECOMMENDED to start checking around 4 minutes: you do NOT want to overcook your donuts. In fact, it’s better to undercook them a bit since your dougnuts will continue to cook when you taken them out of the oven.

While the donuts are baking, place the butter in a medium bowl. Place the sugar and cinnamon in a separate bowl.

Remove the donuts from the oven and let cool for just a minute or two. Dip each one in the melted butter and a quick toss in the sugar bowl.

Eat these puppies asap, or reheat them for 10-15 seconds in the microwave the next day.