Homemade Apple Butter:
What to do with all the apples you picked 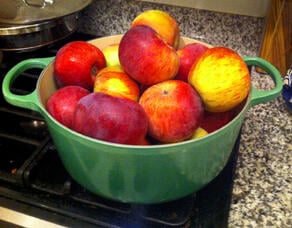 This weekend we went apple picking at Honey Pot Hill Orchards. This seems like a benign enough statement, but for anyone that's ever gone apple picking, you know the truth: at the end of the day, you will almost invariably end up walking out of the orchard with many more apples than you ever intended to pick. Or, maybe that's just me. But if the orchard cashiers give you a bag, the obvious next step is to fill the bag...right? Well, regardless of proper apple picking decorum, that's exactly what we did: 15 minutes after we hopped off the hay wagon and into the field, we'd filled our bag with approximately 20 pounds of apples.

So that brings us to our next obvious question: what's a girl to do with all those apples? While I'd love to say the answer is to bake 15 pies, there's a better solution: apple butter!

I'd made my first batch of apple butter two years ago and was surprised at how easy it was to prepare. Cut up apples, put in Crockpot, throw in minimal seasoning, and let cook. Four hours later, voilà: apple butter! I'd overcooked my original batch a bit so it had a more caramelized flavor than I think is typical, but the apple butter was so delicious I'd been looking forward to making another batch ever since.

Contrary to what the name implies, there's actually no butter in apple butter. In fact, the it's more like super-concentrated apple sauce: the name "apple butter" comes from its creamy, thick, and spreadable consistency--kind of like very soft butter. Because it has a high concentration of natural sugars, apple butter also has a long shelf life. Case in point: I have a jar in the fridge from two years ago that was opened 6-7 months ago and is still alive, kicking, and delicious.

Enough chitchat, on to the recipe!

1. Peel, core, and coarsly chop approximately 7 lbs of apples (for me, that worked out to be about 15 Cortland apples)

2. Add to pot and place over medium heat.

3. Mix sugars, spices, and salt in a bowl, then add to apples. Stir well and allow apple mixture to come to a low boil.

4. Add cinnamon stick, then cover the pot and let the apples cook down until they're almost all broken up (this takes about an hour and a half over low to medium heat). 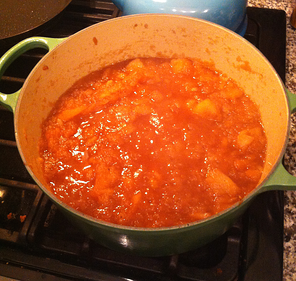 5. Use an immersion blender to puree apples until smooth. 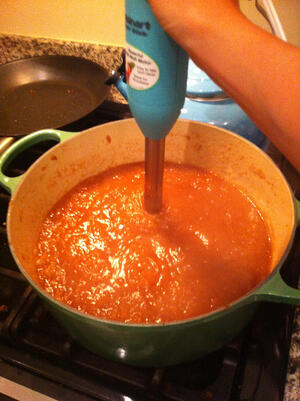 6. Let simmer for an additional 30-40 minutes, or until you reach a desired color--the darker the butter, the more caramelized the apples. 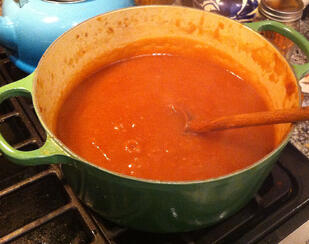 7. Can the butter or just eat it out of the pot!